November 16, 2022Uncategorizedby Crystal O'Brien
Gary Schools Elementary Students Return to Spell Bowl Competition after Years of Inactivity
(Merrillville)  — After years of inactivity, the Gary Schools is officially back in the Spell Bowl game. Earlier this week, scholars from all five Gary Community School Corporation elementary schools traveled to Merrillville Intermediate School for the spelling competition. Banneker at Marquette and Daniel Hale Williams snagged third place in their respective divisions.
Upon taking the helm as Manager of the Gary Schools, Dr. Paige McNulty often discussed that students would return to academic competitions across the region.
“To say I am excited for our students is an understatement,” said McNulty. “They are out in the community flexing their academic prowess and this is only the beginning. The community needs to see what our students are learning in the classroom.”
Elementary Education Director Dr. Esther Goodes worked with principals and teachers to ensure a smooth transition into competition mode.
“The children practiced and practiced and then practiced some more,” said Goodes. “I think the adults were more nervous than they were. We just wanted them to do well as they re-entered this type of competitive environment and they made us proud.”

Unlike the traditional oral spelling contest, teams use one representative per round to correctly spell the contest words. Winning teams are named based on the cumulative total of correctly spelled words of all members.  Junior and Senior teams have the opportunity to qualify for a State Finals competition.

Goodes went on to share that the students are already talking about competing next year. “Now that they’ve had a taste of victory, they want to win it all.”
For more information about the Gary Schools, visit http://www.garyschools.org.
###
Caption: Students from Banneker at Marquette and Daniel Hale Williams Elementary Schools pose after winning 3rd place in their respective divisions at the Spell Bowl. 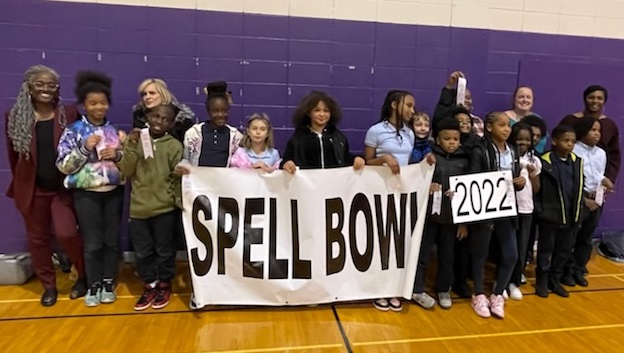