Merit of Distinction Award to our Director of Fine Arts 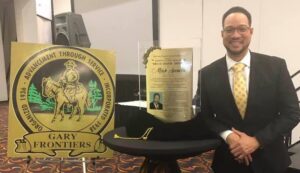 Mr. Spencer will be presented this Award for his outstanding and unique work in the fine arts community in the School District and the City of Gary. “For over fifteen (15) years, Mark has produced some of the most popular Broadway musicals produced on Broadway. Each year for African-American History Month, Mark debuts a creative and highly anticipated theatrical production. Few individuals have done more to advance fine arts than the incomparable Mark Spencer. The Katie Hall Educational Foundation, Inc. is humbled to present him with one of our highest distinctions, the Merit of Distinction Award”, commented Junifer Hall, CEO and Chairman of the Foundation.

The Katie Hall Educational Foundation, Inc. is a living memorial to U.S. Representative Katie Hall (D-IN-1) the author and sponsor of House of Representatives Bill H.R. 3706, commonly known as the Dr. Martin Luther King, Jr. National Holiday Law, which is observed annually on the third Monday in January since 1986. Moreover, the Dr. Martin Luther King, Jr. National Holiday is celebrated by millions of Americans, and in some form, in more than 100 countries around the world. U.S. Representative Hall also taught in the Gary Community School Corporation for more than thirty-five (35) years as a U.S. History and U.S. Government/Economics teacher.

The other Honorees to be recognized along with Mr. Spencer are The Honorable Eric J. Holcomb, the 51st and current Governor of the State of Indiana and Dr. Glenda Glover, Supreme Basileus, Alpha Kappa Alpha National Sorority, Inc. The Harriet Tubman Essay Contest Award winners for elementary school students will be announced in addition to the Attorney Charles Hamilton Houston Award winner for high school students as well.

The Awards will be presented in the South Atrium (directly across from the Governor’s Office), Indiana Statehouse, 200 West Washington Street on Friday, April 9, 2021, at 2:00PM In The Afternoon (EST). The General Public is invited to attend.

All persons entering the Indiana Statehouse for the Katie Hall Public Service Awards Presentation are required to wear masks and social distancing protocols will be strictly enforced.

For more information, please contact the Law Office of Attorney John Henry Hall,Ed.D.,LL.M. at (219) 883-7711 or the katiehallfoundation@aol.com.

Doing what is best for students today, tomorrow, everyday.